ON A day when APIA-Leichhardt Tigers needed a hero, they found one in Brad McDonald, who scored twice in four second half minutes to secure a 2-0 victory against Rockdale City Suns.

It was a result that provided a real boost to the Tigers’ flagging season, especially after their hammering at the hands of Sydney Olympic last weekend. It also keeps them mathematically in the hunt for the top five, although that may yet be a bridge too far.

For Rockdale, it is a reversal that has dented their chances of catching up to the top three and instead put them in the clutches of those below them ahead of their tough trip to Blacktown City’s Lilys Football Centre next weekend.

The home side was unchanged from the team that beat Marconi last weekend, so Tahj Minniecon was again left on the bench in favour of Toufic Alameddine, while Sean Symons was preferred to Steven Hesketh at left back.

APIA-Leichhardt was able to welcome back their captain Michael West into the centre of defence with Jamie Lobb making way. Matthew Mayora, who replaced Joey Gibbs in attack, was excellent.

His strength and ability to hold the ball up meant that Askin Oygur and Paul Kohler had a real task on their hands to keep the APIA number 15 quiet and although he didn’t score, he was the focal point of the Tigers attack.

APIA threatened as early as the fourth minute when Daniel Fogarty used his incredible speed to find himself in behind, but Rockdale keeper Tomislav Arcaba raced from his line to deny him. The APIA winger attempted to help the ball over Arcaba, but the goalkeeper spread himself well.

Aside from that opening, the start of the match was dull as neither side exerted any control over a ball that often bounced in awkward directions on a bumpy pitch.

Stephen Kayes blasted a shot wide from a good position, as did Alameddine, as both took hopeful shots to try and break the deadlock.

Rockdale City should have taken the lead shortly before the break, but as so often this season, APIA’s goalkeeper Andrew Bazi stood up to make a superb save.

Nikola Taneski, against his old club, had his shot superbly blocked by West, before Marko Jesic saw his shot cannon into Travis Oughtred. The ball dropped to Tadhg Purcell and he looked certain to score, but Bazi was on hand to make a sensational stop flying through the air to his left and the score remained level as the teams headed for the sheds.

Jesic had a wonderful opportunity to open the scoring at the start of the second half when an incisive pass from Paul Reid found West short of pace, but Jesic didn’t have the composure to complete the move, shooting wastefully high and wide.

It was a miss that would cost Rockdale dearly.

In the 62′ minute, Blake Powell beautifully nutmegged Sean Symons and in doing so, set Fogarty clear on the right. The winger crossed superbly to the back post, where McDonald was able to latch on to a first time volley, shooting into the ground; the ball bounced into the top corner leaving Arcaba helpless.

It was a well crafted goal and the breakthrough the game needed.

APIA continued to attack down the right through Fogarty, whose pace tested Symons over and over again. But, it was still a surprise when the Tigers doubled their lead only four minutes later.

Fogarty’s cut back from the right found Mayora who had a shot blocked. The ball dropped kindly to McDonald, who bundled the ball home from close range to double his and APIA’s tally.

Suddenly, Rockdale City had it all to do.

Branko Culina responded by sending on Minniecon and Patrick Savor, and also pushing Symons in to midfield and reverting to a back three. It only served to spur on APIA who countered with relish, hitting the influential Mayora time and time again as they got the ball forward quickly.

Jesic had a good chance in the 69′ minute, but he dragged his shot wide. The Suns huffed and puffed as the game headed towards 90 minutes, but they were unable to penetrate APIA’s excellent back four and goalkeeper. 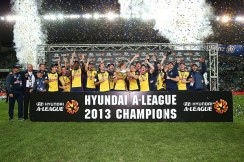 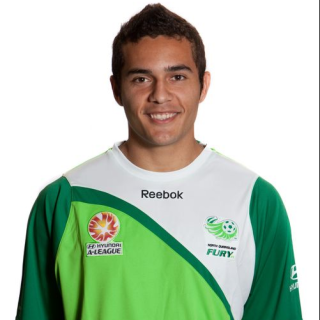